We're sorry but the candle you have selected is currenty in the process of being purchased or has just recently been purchased.

Please feel free to select another candle or check back in 15 minutes to see if the candle you have selected has been released for purchase.

We're sorry but there are no candles available for lighting.

You have already begun a candle purchase session. If you would like to continue with your current candle choice please click "Continue" otherwise please click "Select Another".

In Memory of
Harold Eugene
Fimple
1925 - 2018
Click above to light a memorial candle.

The lighting of a Memorial Candle not only provides a gesture of sympathy and support to the immediate family during their time of need but also provides the gift of extending the Book of Memories for future generations.

In the event that there is an error
in the information presented,
please contact the funeral
home by clicking here. 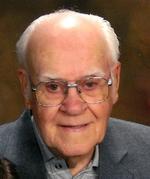 Harold Eugene Fimple, 92, Independence, MO passed away June 15, 2018. Services will be 10 am, Wed., June 20 at Speaks Suburban Chapel, 18020 E. 39th St., Independence, MO 64055. Visitation will begin at 9 am before the service at the chapel. Graveside services will follow at 2 pm at Memorial Park Cemetery in Sedalia, MO.
Harold was born July 13, 1925 in Sedalia, MO and graduated from Smith-Cotton High School there. He was a U.S. Army veteran who fought in WW II in the European Theater. He earned an Associate Degree from Rockhurst College. He was an accountant for the Army Corps of Engineers from 1951 until his retirement in 1977. He enjoyed working in his yard and loved traveling with family in his RV. He and his wife, Barbara, spent many winters in Texas and once drove to Alaska among their numerous trips. Most of all he loved spending time with his grandchildren and attending their sporting events.
Harold was preceded in death by wife of forty years Ruth Yvonne (Wasson) Fimple. He is survived by his wife of thirty-one years Barbara Fimple, of the home; daughter Janet Critchfield and husband John, Vancouver, WA; son Ron Carroll; daughter Paula Hickman and husband Mike; brother Emmett “Bud” L. Fimple, all of Independence, MO; sister Beverly Bottom and husband Glenn, Sedalia, MO; seven grandchildren and ten great-grandchildren.
Condolences may be expressed at www.speakschapel.com (Arrangements: Speaks Suburban Chapel 816-373-3600)

This Book of Memories brings those affected by loss together by encouraging communication and self-expression. By giving friends and family a special place to tell their stories and express their feelings of loss, it helps them care for one another during a very difficult time. Click on any of the links to the right to access features or information within this memorial website.