To share your memory on the wall of Allan Davis, sign in using one of the following options:

Allan was born October 24, 1933 in Watseka, IL to Jacob and Annice Davis. He served as a Marine in Korea and graduated from Technical High School in Indianapolis, IN. He attended Finley Engineering College in Kansas City. Allan worked for Bendix/Honeywell, retiring after 30 years.

Allan also served as a Scout Master for Troop 12 in KC, MO (one of the first troops founded west of the Mississippi.) He later served as Scout Master of Troop 422 in Independence. While Scout Master, 5 boys attained the rank of Eagle Scout, one of which was his son, Eric.

In 1967, he married Joy Lynn Stone. They were married 52 years. To this union was born Eric Davis and Stefanie Luttrell (Tim). He had 3 grandchildren, Melody Willey, Heather Crabb and Justin Luttrell; 3 great grandchildren: Bennett, Abel and Dani Willey.

Allan was a member of the Summit Grove Community of Christ Church. He served the office of Elder.

He was preceded in death by his parents, Jacob and Annice Davis; sisters, Sandra Jean Davis, Carolyn Machemer, and Marianne Morris. He is survived by 2 brothers, Jacob Davis of Independence, and Ray Davis of Lebanon, MO.

Receive notifications about information and event scheduling for Allan

Donations are being accepted for:
Summit Grove Congregation of the Community of Christ North Care Hospice

Consider providing a gift of comfort for the family of Allan Davis by sending flowers.

We encourage you to share your most beloved memories of Allan here, so that the family and other loved ones can always see it. You can upload cherished photographs, or share your favorite stories, and can even comment on those shared by others.

Posted Jan 24, 2020 at 11:41am
Allan and Joy Lynn were very kind people we went to church with at Edgewood for many years. They had a wonderful family with Eric and Stephanie, whom I taught in Sunday School. They were faithful in attendance and supporting activities that were sponsored. Joan Vun Cannon
Comment Share
Share via: 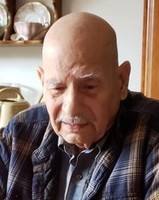