To share your memory on the wall of Betty Alkire, sign in using one of the following options:

She married Daniel Wayne Hedrick in January of 1959. Five children were born to this union: Diane, Lisa, Brett, Daniel and Julie. She later met William E. Alkire and they were married in 1975. As an independent artist, Betty absolutely loved making stained glass and designing various charcoal and pen and ink portraits of people.

Her family knew her as a very independent woman, who was a workaholic, but also a loving wife, mother. Betty lived in the Ozarks for several years. It was one of her favorite places, as she loved the outdoors and nature. For many years, Betty was recognized in “Who’s Who of Midwest Artists.” She was such an ornery, friendly and fun lady who was the collector of many things and anything antique and she will be dearly missed.

Cremation is planned, and the family will be having a private service to honor Betty. Online condolences may be expressed to the family at www.speakschapel.com (Arrangements: Carson-Speaks 816-252-7900)
Read Less

Receive notifications about information and event scheduling for Betty

Consider providing a gift of comfort for the family of Betty Alkire by sending flowers.

We encourage you to share your most beloved memories of Betty here, so that the family and other loved ones can always see it. You can upload cherished photographs, or share your favorite stories, and can even comment on those shared by others.

Posted Sep 25, 2020 at 11:06pm
Dearest Brett and Sheila,
What a talented and Beautiful Momma you had. I would have loved to see some of her paintings. You both have my heartfelt condolences. I know what it's like to lose your Mom, and its' so hard, but God has a way of softening the pain as time goes by. I know you have great memories. She was a beautiful lady. Love you both. Cindy.
Comment Share
Share via: 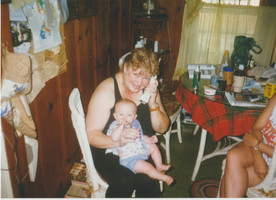