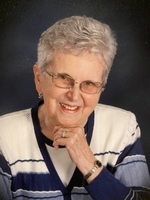 Carol Bishop, 89, beloved wife, mother, grandmother, and great-grandmother passed away in her sleep from cardiac arrest on Easter Sunday, April 12, 2020. She was born on December 9, 1930 in Independence, Missouri to William and Edith Thurmon. Carol lived her entire life in Independence, graduating from William Chrisman High School in 1948. A month later she married the love of her life, Thomas Bishop, and they enjoyed 59 happy years together.

Carol worked for many years at the Vendo Company as an Executive Assistant. She enjoyed reading and crossword puzzles, as well as sewing, cross-stitch, crochet, and knitting, and created hundreds of sweaters, afghans, wall hangings, and articles of clothing for her children and grandchildren. She was a longtime member of the First Christian Church in Independence and participated in their prayer shawl ministry.

Carol was also known for her cooking, improvising recipes that family members still try to recreate. After Tom retired, she helped with his woodworking hobby by painting designs on the baskets, puzzles, carousels, and other items he built. Tom and Carol had many friends throughout their life together, played cards with family and friends weekly, and were formidable bridge partners in several local tournaments.

A private interment is planned for Tuesday, April 21st at Mt. Washington Cemetery with a memorial service at Carson-Speaks Chapels pending and will be announced on their website at a later date.

In lieu of flowers, contributions may be made in her honor to First Christian Church of Independence.