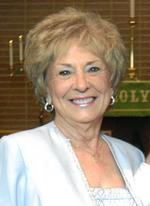 Carolyn Ann Harbaugh, 87, of Independence, MO passed away February 24, 2020. A visitation will be held from 1-2:00 p.m. followed by a 2:00 p.m. service on Saturday, February 29, 2020 at Carson-Speaks Chapel, 1501 W. Lexington Ave., Independence, MO. Burial at Woodlawn Cemetery. In lieu of flowers, contributions may be made to the Carcinoid Cancer Foundation https://carcinoid.kindful.com/ or FOXG1 Research Foundation https://www.foxg1research.org/donate Carolyn was born July 7, 1932 in Independence, MO. She lived most of her life in Independence, except for two years in San Diego, while her husband was stationed at the Navy base. Carolyn attended Bristol Grade School and Northeast High School, graduating in 1949. Carolyn married Vernon Malott on June 16, 1950. They had four children. She was preceded in death by her husband Vernon; two sons, Mike and Mark; and granddaughter, Terri Anne. She is survived by her daughter, Janet Williams (Lloyd); son, Matthew Malott (Vicki), and daughter-in-law Linda Malott; ten grandchildren, Jennifer, Connie, Dustin, Emma, Allison, Alaina, Sarah, Chance, Molly and Chris; great grandchildren, Grace, Ruby, Thomas, Laney, Ireland, Hank, Isabella and Sydney also a brother, Warren Weston and his wife Wanda. Carolyn was a life-long member of Trinity Episcopal Church where she taught Sunday School, and was a member of the choir and Altar Guild. She worked at Blue Ridge Bank and H&R Block, and retired from Blue Ridge Bank in 1999. Vernon passed away in 1984, and years later Carolyn met and married Glenn Harbaugh, who also preceded her in death. Online condolences and memories may be left for the family at www.speakschapel.com (Arrangements: Carson-Speaks Chapel 816-252-7900)