To share your memory on the wall of David Hanaway, sign in using one of the following options:

Dave was born to John and Elsie (Colby) Hanaway on January 26, 1931 in Jackson Co, MO. He proudly served in the U.S. Army from 1952-1954, and he was a member of St. Mary’s Catholic Church in Independence for 60 years. Dave worked as a manufacturing engineer at Allis Chalmers in Independence, MO for 27 years and enjoyed gardening, golf and playing pool in his free time. He will be remembered as a devoted husband and father.

Receive notifications about information and event scheduling for David

Consider providing a gift of comfort for the family of David Hanaway by sending flowers.

We encourage you to share your most beloved memories of David here, so that the family and other loved ones can always see it. You can upload cherished photographs, or share your favorite stories, and can even comment on those shared by others. 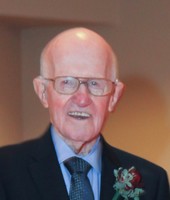