To share your memory on the wall of Dorothy Roberts, sign in using one of the following options:

Provide comfort for the family of Dorothy Roberts with a meaningful gesture of sympathy.

Consider providing a gift of comfort for the family of Dorothy Roberts by sending flowers.

We encourage you to share your most beloved memories of Dorothy here, so that the family and other loved ones can always see it. You can upload cherished photographs, or share your favorite stories, and can even comment on those shared by others.

Posted Dec 18, 2019 at 11:09am
Thinking of you and your family Karen. I know you feel some relief that your sweet momma is at peace, but also know she will be missed by many. Hugs and prayers for you all. Barbara Prine (Mary Choate’s daughter)
Comment Share
Share via:
AW

Posted Dec 17, 2019 at 08:16pm
We were very sorry to hear of Dorothy's passing. Our deepest sympathies to the families. Ted will always remember Dorothy for her kindness, generosity, and friendship.
Comment Share
Share via: 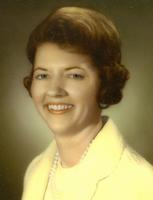