To share your memory on the wall of Edgar Van Fleet, sign in using one of the following options:

Ed graduated from Chaffee High School and Junior College in Ontario, California. He joined the Army during WWII and was stationed on Okinawa in the South Pacific and obtained the rank of Sergeant. He was awarded the WWII Victory Medal, Asiatic Pacific Campaign Medal with 2 Bronze Stars, the Philippines Liberation Ribbon with 1 Bronze Star, the American Campaign Medal and Good Conduct Medal with an Honorable Discharge in 1946.

Shortly after returning from the war his father passed away and the family moved to Independence, Missouri. He attended Graceland College and met his wife Kathryn (Jagger) Van Fleet. They were married July 1, 1949 and enjoyed 65 years together till Kay’s passing in 2014, leaving 2 sons Richard and Ronald. Ed also attended University of KC and Missouri University in Warrensburg and obtained his master’s in education administration and History degrees for teaching. He taught High School in Raytown then transferred to Kansas City Missouri School District where he served as a teacher, counselor and then a Vice Principal at various HS including Paseo, Van Horn, Southwest and others. He retired from the school district at age 68 and continued working in various occupations such as a Wal-Mart greeter, Auto Auction driver and Royals Security guard.

Ed loved the outdoors, fishing and the mountains. He grew up next to Mount Olympus and Mount Baldy in California in the foothills on a citrus ranch. His love for the mountains continued all his life.

He was a devoted husband, father and grandfather and spending time with his sons and grandchildren was important to him. His desire to be of service was a driving force in his life as he strove to serve his Lord and God. He was an Elder in the RLDS / Community of Christ Church and a member of the Special Ministries Congregation. Ed had a desire for Zion. His conversations would eventually turn to the Kingdom of God or subjects of the Scriptures. He was thrilled to live in Independence and the hope of the Kingdom burned in his heart. He ministered for his Lord in various ways from church responsibilities, school and Boy Scouts. He was highly respected by everyone and was found even by his students to be an honest and honorable man. He loved his Lord and his prayer life was dear to him.

One of his greatest joys after he retired was serving as Chaplain at Centerpoint Hospital, sharing and allowing the Lord to bring comfort to those in need. He gave guidance to parents struggling with teens, counsel to young men who had no father, a firm guiding way to those who needed it and a love for those that seemed at times to not be loved. He lived out the two greatest commandments in our eyes in a marvelous and wonderful way. He was a great example for us all.

He is survived by his 2 sons, the oldest Richard Van Fleet and wife Karen Volz with their 3 sons, Bryan, Eric and Jason. The youngest son, Ronald L. Van Fleet married to Brenda French with their 3 children Katie and her husband, David Cromwell, Breanna and her husband Nate Garoutte and Zach Van Fleet all of Independence, Missouri and many nieces and nephews.

Online condolences may be expressed at www.speakschapel.com

Receive notifications about information and event scheduling for Edgar

Consider providing a gift of comfort for the family of Edgar Van Fleet by sending flowers.

We encourage you to share your most beloved memories of Edgar here, so that the family and other loved ones can always see it. You can upload cherished photographs, or share your favorite stories, and can even comment on those shared by others.

Posted Feb 01, 2020 at 12:48pm
What a beautiful tribute to a wonderful loving man. He lived a good Godly life and we have many wonderful memories of our times together as a family. He radiated love and kindness and was a blessing to all that were privileged to walk and talk with him. We find our hearts full as we look upon how pleased God must be to say now,"Well done my faithful servant, Come and abide with me ."
Jack and Margaret French
Comment Share
Share via: 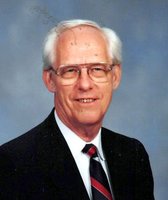