To share your memory on the wall of Elizabeth McLeod, sign in using one of the following options:

Print
Elizabeth (Liz) Kay McLeod passed away peacefully in her sleep at home, on January 2nd, 2020 at the age of 74.

Elizabeth was preceded in death by her father (James E. Rice), her mother (Dorothy M. Winslow), her sister (Edna Harrington),... Read More
Elizabeth (Liz) Kay McLeod passed away peacefully in her sleep at home, on January 2nd, 2020 at the age of 74.

Elizabeth was preceded in death by her father (James E. Rice), her mother (Dorothy M. Winslow), her sister (Edna Harrington), and her brothers (James E. Rice II and Ernie Rice).

Elizabeth is survived by her loving husband of 56 years Malcolm McLeod. They were married in Independence, MO on June 7th, 1963, at Fairmount Christian Church.

Elizabeth was born in Kansas City, MO on February 10th, 1945. She graduated from Raytown Senior High in 1963. She went on to work for Pace School Bus Services for 25 years. After retiring she went on to volunteer at Fairmount Food Pantry for 22 years, where she and her husband served as site managers.

Elizabeth’s favorite pastime was spending time with her family, and being a grandmother. She enjoyed being involved with every activity her grandchildren participated in. Angels were very special to Liz. She could be found giving pocket angels to everyone who impacted her life. In their earlier years, Liz and Mac enjoyed spending a lot of time square dancing, with friends.

The funeral service will be held at Fairmount Christian Church, where Mac and Liz have been lifelong members, serving in many capacities. Services will be on Wed. at 11am, followed by a graveside service at Mt. Washington Cemetery.

In lieu of flowers, memorial donations may be made to The American Cancer Society P.O. Box 22478 Oklahoma City, OK 73123, or to Community Services League at Fairmount Outreach 800 S. Hardy, Independence, MO. 64053.

Consider providing a gift of comfort for the family of Elizabeth McLeod by sending flowers.

We encourage you to share your most beloved memories of Elizabeth here, so that the family and other loved ones can always see it. You can upload cherished photographs, or share your favorite stories, and can even comment on those shared by others.

Posted Jan 03, 2020 at 06:54pm
From Herbie and Judy
Many memories of visiting across the street at Scott Cox. Talking cars with Mac and enjoying your company, such great people. 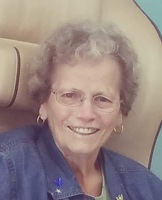