To share your memory on the wall of Frances Worden, sign in using one of the following options:

Provide comfort for the family of Frances Worden with a meaningful gesture of sympathy.

Receive notifications about information and event scheduling for Frances

Consider providing a gift of comfort for the family of Frances Worden by sending flowers.

We encourage you to share your most beloved memories of Frances here, so that the family and other loved ones can always see it. You can upload cherished photographs, or share your favorite stories, and can even comment on those shared by others.

Posted Apr 14, 2020 at 01:18pm
It was such a pleasure seeing Frances every Sunday with her loving children. I did not get to know her well, since i am in a wheel chair and in another building, but, I felt a real connection to her and her children who were so friendly and helpful. It was a joy to hear Frances sing along with the recorded music before the services. I could tell that she had a real affinity for music. In reading her obituary i learned so much more about her. One thing was clear to me from her personal contact and in her obituary that she loved the Lord and He loved her.

Posted Apr 13, 2020 at 11:27am
I thank God for my mother. I will miss her. She is put a smile on my face because she was the only one who called me Anna Lynne. I appreciated her going out of her way to see that my children went to Vacation Bible School and church youth camps. She worked hard to ensure that our family could take family vacations every year as I was growing up; great times. I enjoyed her piano and organ playing and our sing-a-longs. Love you Mom; thanks for the memories. Anna Lynne Worden Madsen
Comment Share
Share via:
JP

Posted Apr 11, 2020 at 04:13pm
Mom was truly an example of service to others. She & Dad were primary caregivers for their parents & siblings and they were very active in the Community of Christ ministries. Mom devoted hundreds of hours to transcribing books for students at the School of the Blind. Her service was awarded several times over the years. However, her most cherished recognition was a simple thank you card from a student that needed a specific book transcribed just for him. Mom was a very devoted & loving Grandma and she loved to take the 'Grands' on vacations & to church camp. So many wonderful memories of a life lived well. She said often this last year that she couldn't wait to 'sing with the angels' . . . is that the Hallelujah Chorus I hear? Happy for you. Love, Janet & Frank
Comment Share
Share via:
CV

Frances was certainly a wonderful servant of the Lord. I enjoyed getting to know her in the church services and also you and Frank. The fact that you children not only visited her every Sunday but also came to church with her and helped as our small congregation needed it. My sympathy to all of you. Carol Norris Vincent, The Groves congregation 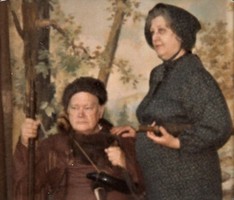