To share your memory on the wall of Freda Stanger, sign in using one of the following options:

Print
Freda R. Stanger, of Independence, a woman of great faith and love for her family, went to her heavenly home on October 1, 2020. She was 93.

A visitation will be held from 1-2pm, Wednesday October 7th with a funeral service following a... Read More
Freda R. Stanger, of Independence, a woman of great faith and love for her family, went to her heavenly home on October 1, 2020. She was 93.

A visitation will be held from 1-2pm, Wednesday October 7th with a funeral service following at Carson-Speaks Chapel, 1501 W Lexington Ave., Independence, MO 64052. She will be laid to rest during a private service at Salem Cemetery in Independence.

Freda was born on New Year’s Day, 1927 in Shelbyville IL, to Merritt and Carrie (Russell) Ragan. She was employed by Lake City Ammunition and then Hallmark Cards in Kansas City, retiring after 15 years. Freda loved the Lord and was a faithful member of Atherton United Methodist Church. She was an active member of the American Legion Auxiliary and the VFW Auxiliary.

Freda is preceded in death by her beloved husband of 57 years, Roy C. Stanger who passed away in 2006; her daughter, Susan Hightower, as well, as her 7 siblings, Noble, Ervil, Gaylord, Gleason, Dorothy, Gladys and Alberta.

In lieu of flowers contributions can be made to Animal’s Best Friend or St. Jude Children’s Research Hospital.
Read Less

Receive notifications about information and event scheduling for Freda

Consider providing a gift of comfort for the family of Freda Stanger by sending flowers.

We encourage you to share your most beloved memories of Freda here, so that the family and other loved ones can always see it. You can upload cherished photographs, or share your favorite stories, and can even comment on those shared by others. 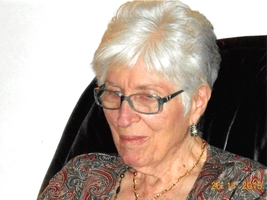