To share your memory on the wall of Harry Droste, sign in using one of the following options:

Harry was born during the Dutch famine (Hongerwinter) period of WWII (1944-45). During his childhood, Harry lived in Enschede and Den Helder, Netherlands, Indonesia and San Mateo, California. This diverse beginning taught him to relate to all people from the janitor to the CEO. He had a special way of connecting with everyone. His confidence was infectious!

Harry was known as a likable, positive, generous, overachieving, loyal and religious man. He enjoyed spending time with family and friends and had a great sense of humor. He is famous for telling the same 5 or 6 jokes. No matter how many times you heard them…..you still laughed…..because he always told them with the same fervor and smile.

Harry built a career in the plastics industry and worked his way up from the bottom, through hard work and dedication, to becoming VP of Operations for Johnson Controls, Inc. It was this same determination that he displayed in battling his terminal lung disease. His fortitude and never-give-up attitude astounded those who witnessed his courage even though the outcome was already predetermined. His faith in God, love of life and family kept him striving to beat the odds of the disease until the very end!

His character was also on display in his lifelong favorite hobby……Racing (homing) Pigeons. Harry took up the racing sport as a child in the Netherlands and never lost his passion for the hobby. He achieved a multitude of awards/victories during his pigeon fancier years. This included recognition of this success when several of his outstanding racing pigeons were inducted into The American Racing Pigeon Union’s Hall of Fame.

Harry loved soccer especially the Dutch national soccer team. He also developed a love for American style football and spent many years in his seat at Arrowhead Stadium rooting for the Chiefs.
Although he will miss this year’s Super Bowl, you can count on him to be rooting for a KC Chiefs glorious victory!

“That a man is a success —who leaves the world better than he found it; who has never lacked appreciation of earth’s beauty or failed to express it; who looked for the best in others and gave the best he had.”— Poem by Unknown

A visitation will be held from 5-7PM followed by a 7 PM Celebration of Life Service on Tuesday, January 28, 2020 at Speaks Suburban Chapel, 18020 E 39th St. S Independence, MO 64055 In lieu of flowers, contributions can be made to the American Lung Association.
Read Less

Receive notifications about information and event scheduling for Harry

Consider providing a gift of comfort for the family of Harry Droste by sending flowers.

We encourage you to share your most beloved memories of Harry here, so that the family and other loved ones can always see it. You can upload cherished photographs, or share your favorite stories, and can even comment on those shared by others. 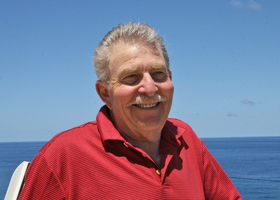