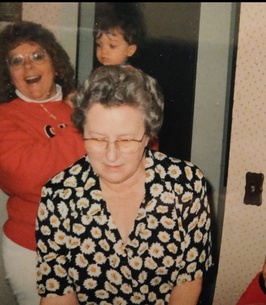 Irmengard “Irma” was born in Thansau, Germany to Henrich and Maria (Raps) Pscherer. She immigrated to the US at age 22, and immediately sought American citizenship. She worked at Commerce Bank of Kansas City from age 25 till she retired at 62. She worked in International Banking in various positions and retired as the foreign exchange teller. She developed many lifelong friendships while at the bank.

At the age of 92 Irma was fiercely independent and was still driving her own car until her death. She could also successfully operate a smartphone. She loved texting as she could “hear” it better.

She loved taking summer vacations to her homeland in Germany. She also loved eating out, swimming, cooking, and barbecues.

Irma developed many lasting friendships throughout her lifetime. She was an example of love and acceptance of all mankind. Not only friends, She loved kids and always treated them with little candies or a dollar. If a child was caught misbehaving, Irma was there to defend them with “oh he’s alright” as the child stormed through the house. Irma was also wise, and only gave advice when asked and always without judgement. She explained how she had overcome the same or similar situation.


Irma, also, loved her dogs. She spoiled them like she did everyone. After all, her dogs and her friends were family.

Irma’s daughter passed away 20 months ago and since then she’s been lovingly cared for by her grandson Billy. On Irma’s last birthday Billy surprised her with a trip to St Louis to eat at Hofbrauhaus. An elegant German Restaurant. Irma beamed from ear to ear when talking about her special day.

She leaves behind family in Germany and many friends (who were like family) that loved and cherished her and most of all learned by her example. She was preceded in death by her parents. Her best friend
John Hreczanik, her daughter JoHanna Hreczanik(Billy T Holman). She leaves to carry on her legacy of kindness and love her grandchildren Billy Hreczanik, Trena Enke,
Vincent Wainscott, Brandan Reeve and Jeff Simpson.

Her children rise up and call her blessed……“Many women have done excellently, but you surpass them all.”