To share your memory on the wall of John Britt, sign in using one of the following options:

Jerry was born on July 21, 1939 in Kansas City, KS to John Homer and Dorothy Dean (Massey) Britt. One for always bettering himself, he obtained several degrees, including a Master of Theology from Franciscan University in Steubenville and a PhD. from Iowa State University in Computer Science and Statistics. He was a Math and Computer Science professor at the Minnesota State University-Moorhead for many years before working for the IRS.

Jerry was very active, becoming a marathon runner and cross-country cyclist in 1972. His fondest memory and greatest accomplishment he said was walking across the United States for a pro-life march. He also enjoyed many playful years with his service dog, Dinty.

Jerry was very active in his church, St. Mary’s Catholic Church in Independence. His faith was very important to him and he took many religious pilgrimages abroad. He also had a sharp sense of humor and smart poker hand. One of his goals in life was to be the first blind poker player to participate in a Las Vegas poker tournament. He almost reached this goal as he was the second blind player. The first player was there the month before. Jerry was a dear friend and will be missed by those that knew him.

He is preceded in death by his parents; his brother, Douglas; and his former wife and friend, Lynn Rockhart.

A visitation will be held Monday, November 16th at 11am with Rosary at 11:30am. Mass of Christian Burial will follow at 12:00pm, all at St. Mary’s Catholic Church in Independence. Interment will take place at Mt. Olivet Cemetery in Raytown.

In lieu of flowers, contributions may be made to St. Mary’s Outreach.
Read Less

Receive notifications about information and event scheduling for John

Consider providing a gift of comfort for the family of John Britt by sending flowers.

We encourage you to share your most beloved memories of John here, so that the family and other loved ones can always see it. You can upload cherished photographs, or share your favorite stories, and can even comment on those shared by others. 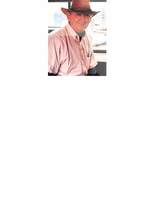