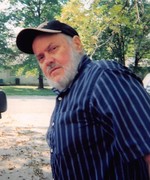 John Edgar Gilbert, Jr., of Independence, MO, a man who always told anyone and everyone to “Spread Out," spread wings of his own when he passed away on March 22, 2021. He was 84 years old. John was born on September 26, 1936 in Kansas City, Missouri to John Gilbert, Sr., and Mattie Gilbert. John met the love of his life, Sylvia Borland, and they married in August of 1961 in Kansas City, MO. Of that union two children were born: Sheryl and John. He worked as a machine operator at Pioneer Container Company for 37 years. John loved watching wresting and rodeo and listening to country music. He was loving and helpful husband, father, and grandfather. Those that knew John best, knew him as a thoughtful and generous man, who would always feed the squirrels outside his home. John was a hardworking man, who also enjoyed being a trickster and telling jokes and he will be missed greatly.

A Private celebration of life for John will be held for family at a later date. In John’s honor, the family suggests contributions to be made to any local fire department or police department of the donor’s choice.

Online condolences may be expressed to the family at www.speakschapel.com (Arrangements: Carson-Speaks Chapel (816) 252-7900)