To share your memory on the wall of Katherine Eaton, sign in using one of the following options:

Provide comfort for the family of Katherine Eaton with a meaningful gesture of sympathy.

She was born on December 27, 1935 in Independence, MO to the late Lewis George McLaughlin and Marjorie Irene (Jennings) McLaughlin. She g... Read More
Katherine Joyce (McLaughlin) Eaton went to be with the Lord on January 10, 2020, at the age of 84.

She was born on December 27, 1935 in Independence, MO to the late Lewis George McLaughlin and Marjorie Irene (Jennings) McLaughlin. She graduated from William Chrisman High School in the class of 1953. On October 7, 1955, she married the love of her life, William Martin Eaton, Sr. They lived many places during their marriage, including Independence, Kansas City, Carthage, Springfield, Pittsburg, Joplin, and the last three years with her daughter Kathy Eaton in Greenwood, MO. She and William co-owned Webb City Bakery from 1977-1985, and later she worked as a sales associate for Walmart.

She and her daughter had the opportunity to travel to different events at Union Station, train trips to Hermann, MO, zoos, and many outings to eat, as well as visit family. She traveled by bus with her senior group all over the United States, and volunteered in small communities in Mexico until she was no longer able to travel. She loved reading, watching daytime TV programs and shows about Alaska and homesteading, and cheering on the Chiefs and the Royals. She also enjoyed spending time in nature, particularly fishing and watching hummingbirds in flight.

She was preceded in death by her husband of 47 years, William Martin Eaton, Sr.; her first child, nine-month-old Sheila Louise Speck; her parents, Lewis and Marjorie McLaughlin; and two sisters, Marjorie Armstrong and Ruth Ann Jones.

The family wants to thank Research Hospital Neuro ICU for the care of their mother, as well as Crossroads Hospice who made her passing full of grace and prayers.

A graveside service will be held on Tuesday, January 21, at 2pm, in Iconium Cemetery in Iconium, MO. In lieu of flowers the family requests donations to ASPCA of Kansas City.

Consider providing a gift of comfort for the family of Katherine Eaton by sending flowers.

We encourage you to share your most beloved memories of Katherine here, so that the family and other loved ones can always see it. You can upload cherished photographs, or share your favorite stories, and can even comment on those shared by others. 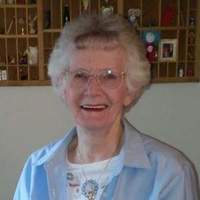