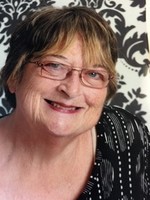 Kathleen Ann “Kitty” Scrogham, 73, of Independence, Missouri passed away on Tuesday, June 9th at Garden Terrace in Overland Park. Visitation will be 6-8:00 p.m. on Thursday, June 18, at the Carson-Speaks Chapel, 1501 W. Lexington Avenue, Independence, Missouri 64052. Service will be held at 10:00 a.m. on Friday, June 19, at the Carson-Speaks Chapel followed by burial at Mount Washington Cemetery in Independence, Missouri. Kitty was born to John & Frances Cullen on December 6th, 1946 in Independence, Missouri and was a lifelong resident. She was a 1964 graduate of Van Horn High School. Kitty met the love of her life, Norman Scrogham, in 1969 and they were married on November 24th, 1970 in Miami, Oklahoma. Kitty worked for AT&T for 32 years and retired in 2006. She was a member of the Independence Seventh Day Adventist Church. Kitty spent her life caring for her family and anyone else that she saw that needed her. She was a fierce protector of her special needs son and spent many years being a caregiver for her husband before his passing. She was an amazing wife, mother, grandmother, sister and friend. She was the best cook in the history of the world! Kitty was preceded in death by her parents, John & Frances Cullen, sister Mary Deller, brother Jimmy Cullen, and by her husband Norman and, sadly, her son John. Those left behind to cherish her memory are daughter Kelly Etter (Shannon) of Lee’s Summit, sister Pam Ellis (Bob) of Independence, granddaughter Samantha Jackson (Jesse) of Belton. grandson Levi Vacca of Raymore, granddaughter Hailey Vacca of Houston, TX, great grandchildren Kaydence and Wyatt Leber of Houston, TX and her life-long best friends, and partners in crime, Nancy Durrill and Doris Douglas. She leaves behind many nieces, nephews, cousins, friends, and co-workers who loved her. The family wishes to thank the amazing and supportive staff at Garden Terrace of Overland Park for the excellent and loving care they provided these last few years. Online condolences and memories may be left for the family at www.speakschapel.com (Arrangements: Carson-Speaks Chapel 816-252-7900)