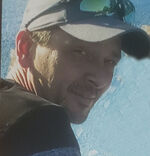 Kent Jeffrey “Bo” McIntosh, 50 of Independence, MO passed away Saturday, December 5, 2020 at his residence. The family will greet friends from 5 to 8:00 p.m., Monday evening at the Carson-Speaks Chapel, 1501 W. Lexington Ave., Independence, MO 64052. The visitation will be held under current Covid-19 restrictions of 50 people maximum at one time in our facility and masks will be required. Private family services will be held later with burial in Floral Hills Cemetery. There will be a reception at 2:00 p.m., Tuesday, December 15, 2020 at 600 Blue Ridge Blvd, Kansas City, MO. Bo was born April 3, 1970 in Kansas City, MO and spent his early life in Denison, TX before relocating back to Independence. He had worked for a number of years on the assembly line at the GM Leeds Plant. He was a member of the UAW #31 in Kansas City. Survivors include; his wife, Rose Daniels-McIntosh of the home; 5 children, Kasey McIntosh of Denison, TX, Alicia West of Joplin, MO, Connor McIntosh and Ashlynn McIntosh both of Lawrence, KS and Arie McIntosh of the home; his parents, Terry and Wilma McIntosh of Independence, MO; a brother, Chad Andrew McIntosh of Independence, MO and a sister, Chelsea; his former wife, Roxi Smothers of Independence, Moa grandson, Zaydon West of Joplin, MO; his best friend, Bob Dyche and a niece Caydence McIntosh. Online condolences may be expressed to the family at www.speakschapel.com (Arrangements: Carson-Speaks Chapel (816) 252-7900)