To share your memory on the wall of Lawrence Brodzinski, sign in using one of the following options:

Provide comfort for the family of Lawrence Brodzinski with a meaningful gesture of sympathy.

Larry was born on November 11, 1949, in Independence, MO, to Lawrence Brodzinski and Helen Olinskey Brodzinski. He went to grade s... Read More
Lawrence Joseph “Larry” Brodzinski, 70, passed away peacefully in Lee’s Summit, MO on May 14, 2020.

Larry was preceded in death by his parents.

A visitation will be held from 10-11am, with Mass of Christian Burial at 11am, both Wednesday, May 20, at St. Cyril’s Parish. Interment with military honors will follow at Woodlawn Cemetery.

Receive notifications about information and event scheduling for Lawrence

Consider providing a gift of comfort for the family of Lawrence Brodzinski by sending flowers.

We encourage you to share your most beloved memories of Lawrence here, so that the family and other loved ones can always see it. You can upload cherished photographs, or share your favorite stories, and can even comment on those shared by others.

Posted May 19, 2020 at 12:02pm
In loving memory of my brother.
Death is nothing at all. I have only slipped away into the next room. Whatsoever we were to each other, that we are still. Call me by my old familiar name, speak to me in the easy way which you always used to. Laugh as we always laughed at the little jokes we enjoyed together. Play, smile, think of me, pray for me. Let my name be the household word that it always was. Let it be spoken without effort. Life means all that it has ever meant. It is the same as it ever was, there is absolutely unbroken continuity. Why should I be out of mind because I am out of sight? I am but waiting for you, for an interval, somewhere very near, just around the corner. All is well. Nothing is past, nothing is lost. One brief moment and all will be as it was before, only better, infinitely happier and forever -- we will be one together with Christ. Amen.
Comment Share
Share via:
JD

Posted May 19, 2020 at 03:48am
Nothing but great and fun memories of Uncle Larry both as a boy but also as a young man too. I was blessed to go back to Missouri for a few years and got to hang out with him a few times. He was always alot of fun to be around. He always had some type of cool car and listening to great music and telling us stories and it seemed you could talk to him about anything. Even though I am far away in this life I always have great memories of everyone that will be apart of me forever.
Comment Share
Share via:
JH

Posted May 19, 2020 at 01:54am
My sincere condolences to my Uncle Larry's loved ones. All I have are fond memories of him as a bright and intelligent man who loved his family. I know he is resting in the arms of his loving parents, Lawrence and Helen Brodzinski.
Comment Share
Share via: 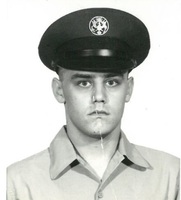