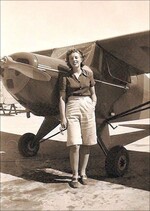 On November 30th, Bea finally arrived at the joyous celebration given in her honor by those she has loved and missed. For many years, she impatiently longed for this party to begin.

As the only child of Robert and Lela (Burton) Lacey, Bea was born on August 17, 1924, in San Bernardino County, California. Her father was a man of movement throughout his life setting an example of working in the field of one’s interests (of which he had many) while her mother taught her about beauty and following rules. They were a family of RLDS faith, service, and creative vision. These values guided Bea and defined her days.

Bea never remarried after being widowed by Byrd Luther, her husband of almost 3 years. Instead, she was accepted by the Foreign Service to work in U.S. consulates around the world. Her love of cultures and her innate gift of understanding rules led to her value on consular staffs. Many friendships were made in the countries of Nova Scotia (Canada), Israel, Spain, Portugal, Ecuador, and Guatemala. Despite language differences, Bea led with her heart and never met a stranger.

Change companioned Bea’s life, and she fearlessly embraced every challenge. She was a woman admired and beloved, so let the reunion begin. Bea has arrived.

Cremation is planned with a service planned at a later date.

Online condolences may be expressed at www.speakschapel.com (Arrangements: Carson-Speaks Chapel 816-252-7900)