To share your memory on the wall of Lois Mabry, sign in using one of the following options:

She was the daughter of Lloyd and Mabel Bell Johnson. Lois lived in Eugene until she was 17 and had completed high school. She then mo... Read More
Lois Dean Johnson Mabry was born on February 26, 1925 in Eugene, MO and passed away on June 13, 2020.

She was the daughter of Lloyd and Mabel Bell Johnson. Lois lived in Eugene until she was 17 and had completed high school. She then moved to Kansas City and went to work for First Loan Co. and was employed there for five years.

In 1946 she met Dennis Mabry and they were married September 27, 1947. They spent their first year of their married lives in Hannibal, MO, where Dennis was an engineer at radio station KHMO. After one year, they moved back to Kansas City where he could further his education and she went to work as a bookkeeper for Ralph L. Smith Lumber Co.

In April 1951, their first daughter, Janice, was born, and in July 1955, their second daughter, Linda, was born. Lois was a stay-at-home mom while the girls were in school and then later went back to work. She was active in PTA at Bristol, Nowlin, and Van Horn schools. She also volunteered at Independence Regional Hospital for 21 years.

In July 1950, they became members of Fairmount Christian Church. She served as a secretary, treasurer, and president of her Sunday school class for many years. She was a member of CWF and served as treasurer there for many years and sewed hundreds of lap robes.

She was preceded in death by her husband of 54 years, Dennis, who died in June 2002, and her parents.

Lois will be laid to rest in Floral Hills Cemetery at a private committal service.

Receive notifications about information and event scheduling for Lois

Consider providing a gift of comfort for the family of Lois Mabry by sending flowers.

We encourage you to share your most beloved memories of Lois here, so that the family and other loved ones can always see it. You can upload cherished photographs, or share your favorite stories, and can even comment on those shared by others. 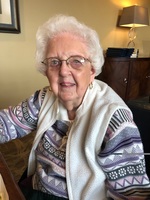