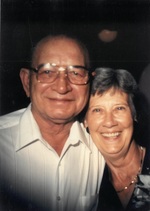 Mona was born on Christmas Eve, 1926 in Maysville, AR. She grew up in the Southwestern MO area and was a graduate of Jay High School. She then moved to the Kansas City area and was employed with Western Union for two years. She married Frank Markle in 1947, and they celebrated 55 years of marriage before his passing in 2002.

Mona lived in Independence, MO for over 60 years. She worked as a sales clerk at the J.C. Penney on the Independence square and then worked as an inspector at AT&T in Lee’s Summit, MO for 26 years before retiring. She remained connected to her coworkers by participating in the Pioneers Group. Among many acts of service, she and the Pioneers rang bells for the Salvation Army and hand-sewed hundreds of heart pillows to donate to convalescing surgery patients.

Mona and Frank were blessed with two daughters, Jenny and Waunene. She adored her family and was a proud grandma and great-grandma. She loved spoiling them by taking them to Chuck E. Cheese, watching movies, or simply spending time with them. She also enjoyed planting flower gardens in her yard and reading. Her culinary specialties - meatloaf and carrot cake – could not be beat!

Mona was preceded in death by her husband Frank and her daughter Waunene Markle Matthews, as well as a brother Fred Latto and a sister Elwanda Smith.

A private interment service will take place in Mound Grove Cemetery. In Mona’s honor, the family suggests that contributions be made to St. Luke’s Hospice House in appreciation for their care and compassion during Mona’s final days.

Online condolences may be expressed at www.speakschapel.com (Arrangements Speaks Chapel 816-252-7900)