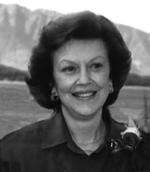 Myrna Jewel Martyr Dean, fun, feisty, mother of five, recently lost her spark of human life at age 86. She died peacefully early in the morning on March 31st after a long battle with Alzheimer’s. Myrna had an eagerness for adventure and fun from a young age. She was born and reared in Chicago. She worked for the owner of the B. F. Brown Co., which set up Officer’s Clubs for the military, as an Office Manager. Myrna extracted a promise from Mr. Brown to transfer her to the first available overseas job so he assigned her to Guam…and she turned 21 years of age while in transit. It was the same job as in the United States, though at twice the rate of pay, and one week later she met the man she would soon marry, Lester M. Dean. During the early years of their relationship Myrna also ran Lester’s office affairs and was integral to his business ventures, including Massey Supply Co., for which she oversaw the loading and shipping of war surplus material from Guam to Japan and to the US mainland. She recounted that “after I quit working in order to raise children Lester had to hire four people to replace the same work load that I did.”
She was very proud of her business acumen and throughout her life continued with this entrepreneurial spirit. She started and ran Assets Conversion Corporation in which she sold assets of a business it wished converted to cash, often as a result of bankruptcy. After closing that company she worked as an Office Manager for Jennings Interiors before opening a store called Christmas Everyday which sold holiday decorations year-round. Christmas Everyday was located on Main Street near the County Club Plaza in Kansas City, in a building owned by her second husband, Frank “Sandy” Jennings, Jr.
Myrna will be missed by her friends and family who have memories of fun card-playing and laughter filled evenings. She loved to go antiquing as well as tap dancing and painting with her best friend of 50 years, Topper. She and Sandy bought a house in Mexico in which they spent the winter months entertaining and relaxing in the sun while she taught herself Spanish. They met many new people who became lifelong friends as both were very smart, curious, and funny people.
She is predeceased by her first husband, Lester M. Dean (1921-2005), her second husband Frank “Sandy” Jennings, Jr. (1932 - 2014), her youngest son, Paul A. Dean (1960-2015) and her sister Janet Martyr Graham (1931 – 2019). She is survived by her sister-in-law, Virginia Jennings Nadeau, her brother, Robert Martyr, and four of her five children, Lorelei M. Dean, Linda Dean-Kennedy, Melanie A. Dean, and Lester M. Dean, Jr. Eight grandchildren, Jeremiah Dean, Keena Dean Masters, Asher Dean, Jacob Summers, Stephanie Summers Hartpence, Spencer Dean, Lauren Handley, Shea Handley, and 4 great-grandchildren, Bella Dean, Lynk Dean, Abel Dean, and Evelyn Hartpence also survive her, all of whom will miss knowing their great grandmother.
A private burial service will take place at Mound Grove Cemetery in Independence on April 25, 2020. Sometime in the future, when all are able to gather together, we will have a fun memorial celebration in “Myrna style.” In lieu of flowers, the family requests that you please contribute to any one of her three favorite charities: Harvesters, Planned Parenthood, or Lead To Read KC. Online condolences and memories may be left for the family at www.speakschapel.com (Arrangements: Carson-Speaks Chapel 816-252-7900)