To share your memory on the wall of Reva Prinz, sign in using one of the following options:

Reva was born on July 22, 1931, in Gillham, Arkansas, the oldest of three daughters to Homer Andrew Bonds and Frankie Smith Bonds. Orphaned at age 10, Reva moved to Thayer, Missouri, where she met her future husband … the ornery next-door neighbor! While not exactly love at first sight, Reva married her childhood sweetheart, Carl Prinz, on May 28, 1950. They set off into the world as newlyweds, settling in Independence, Missouri, and raising three daughters.

Reva always worked outside the home and spent the last 30 years of her career as a cost estimator for Wilcox-Electric, retiring in 1996. She was a highly skilled seamstress, an avid reader and musically gifted in voice and piano. She spent many years traveling and singing with the Mozarkians, a local gospel group. She exhibited her strong Christian character by volunteering her time at a local hospital, rescue mission, and her spiritual home, Calvary Baptist Church in Independence. Throughout her life, her family was her priority, and in later years she devoted much of her attention to her husband after he suffered a stroke. Reva will be remembered as a wonderful and loving wife, mother, grandmother, great-grandmother, sister, and aunt.

Reva is survived by her three daughters and their families: Vickie Barclay of Layfette, California, (daughter Erin Sutch, husband Adam and their children Kylie and Lincoln, and daughter Kelsey Schirm and husband Erin); Cindy Williams and husband Mike of Sugar Creek, Missouri, (daughter Rosemary Weik, husband Chuck, and their children Josephine and Max Shaw); and Shellie Speer of Liberty, Missouri, (son Jesse Speer and his children A.J. and Macy, son Jay Speer, wife Heather and their children Brooklyn, Brady, and Breckin, and daughter Anna Speer and her son Ayden). Reva is also survived by her two sisters Mary Wise and Belva Frische, and many nieces, nephews, and extended family.

She was preceded in death by her husband of nearly 63 years, Carl Prinz; son-in-law Bill Speer; and grandson Carl Andrew Williams.

A private graveside service will be held at Mount Washington Cemetery.

In lieu of flowers, the family suggests contributions be made to Crossroads Hospice and Palliative Care in honor of Reva at crhcf.org.

Online condolences may be expressed to the family at www.speakschapel.com  (Arrangements: Carson-Speaks 816-252-7900)
Read Less

Receive notifications about information and event scheduling for Reva

Donations are being accepted for: Crossroads Hospice of Kansas City.

Consider providing a gift of comfort for the family of Reva Prinz by sending flowers.

We encourage you to share your most beloved memories of Reva here, so that the family and other loved ones can always see it. You can upload cherished photographs, or share your favorite stories, and can even comment on those shared by others. 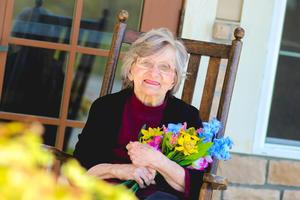