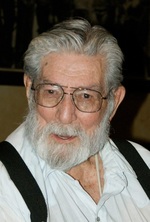 Richard Alden Wheaton, Sr., 97 of Independence, MO passed away Saturday, November 9, 2019 at Truman Lakewood Hospital. A graveside service with full military honors will be held at 10:00 a.m., Saturday, November 16, 2019 at Mt. Washington Cemetery. Following the graveside a Celebration of life will be held at 11:30 a.m., Saturday at the Church of Christ (Temple Lot), 200 S River Blvd, Independence, MO 64050. Richard was born March 5, 1922 in Mound City, MO to Clarence L. Wheaton, Sr. and Angela (Denham) Wheaton. He graduated from William Chrisman High School in 1941 and enlisted in the Army Air Corp on January 1, 1943 and proudly served his country in the European Theatre during WWII and discharged in 1946 at the rank of major. He had worked as a civil engineer for the Missouri State Highway Department for a number of years as well as Evans, Burns and McDonell and the Bureau of Land Management until his retirement. He enjoyed fly fishing, photography, traveling and was an accomplished artist. He was also a gifted jeweler and designer and had designed many pieces. He was also an amateur archeologist. He was a member of the Church of Christ, Temple Lot and has been a minister since the age of 16 until his death and was a missionary to Native Americans. Survivors include; 7 children, Karma, Konie, Brad “Chip”, Vanna Jo “Jody”, Richard Alden, Jr., Patricia and Nanette; 14 grandchildren, 11 great grandchildren and 1 great great grandchild. He was preceded in death by his loving wife Velma in 2005, his parents and siblings, Clarence, Jr., Ed, Tom, Kathrine and Ellen-Angela. He was preceded in death by son in law, Tom Caviness, granddaughter Nicole and grandson Ryan. Online condolences may be expressed to the family at www.speakschapel.com (Arrangements: Carson-Speaks Chapel (816) 252-7900)