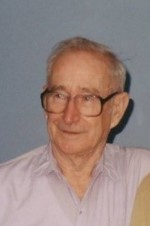 Ronald Allen Moore was reunited with his beloved wife in heaven on September 21, 2020. Ron was born on December 7, 1926, to Frank and Sadie (Sudduth) Moore in Kansas City MO, the youngest of 8 children. He married the love of his life, Ruth Elaine Marsh, in 1946.

They bought their Independence home in 1956 where they raised a family, and he continued to reside there after her death in 1996. In 2016 he moved to Oklahoma to live with his son and family due to increasing memory issues.

He served in the U.S. Navy on a minesweeper ship in the Panama Canal zone during World War II. He was a mail carrier for the U.S. Postal Service in Kansas City MO, retiring in 1987 with 42 years of service. He was a lifetime member of the Swope Park Masonic Lodge. His fondest memories were times with family: fishing in Canada, summers at the farm, playing cards, and New Year’s Eve parties at his Independence home that were legendary.

He was preceded in death by his parents and siblings, his wife of almost 50 years, and his eldest daughter, Sheryl Moore.

In lieu of flowers, donations to the Alzheimer’s Research Foundation (alzheimersresearchfoundation.com) would be appreciated by the family.

Funeral will be held under the direction of Speaks Chapel (1501 W. Lexington Ave, Independence) on Wednesday, September 30. Visitation at 9:00 am and service at 10:00am, followed by graveside interment. Masks are required for attendance.