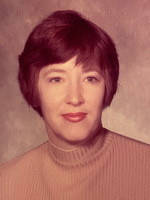 Sue Nell Smith, 80, passed away peacefully on April 24, 2020, at her home in Independence, Missouri, with her daughter Raechell by her side.

A loyal, devoted and treasured mother, wife, daughter, sister, aunt, grandmother, friend, mentor and neighbor, Sue will be missed by all those whose lives she touched.

Sue Smith was born on June 24, 1939, in Woodward, Oklahoma, the youngest child of E.J. Kerchner and Aldean (Carpenter) Kerchner. As a child, Sue was usually barefoot and outside, with old Red by her side. A 3-legged stray who showed up one day at the family ranch south of Fargo, Red had lost one leg to a coyote trap. E.J. never turned away a stray animal and along with horses, cattle, and chickens, there was always a dog or two around. Sue was the baby of the family, and her older sister Rae Ann remembers their dad rocking her to sleep every evening until she was big enough for her feet to touch the floor.

Sue graduated from Fargo High School in 1957 and Enid Business College in 1958. She began her working life at Western State Hospital in Fort Supply, where her mother Aldean worked for many years, and she spent a summer living with her sister Peggy in Roswell, New Mexico working to save money for college. After graduating from business college, she was hired by the Federal Bureau of Investigation in Oklahoma City. When the FBI vetted her background for the position, they interviewed acquaintances in Fargo and reported the one thing they could find on her: that she didn’t like to wear shoes. Soon Sue alighted for more adventure, joining a girlfriend in Colorado Springs. There she worked for the U.S. Army at Fort Carson and made frequent weekend trips into the mountains in her white MG convertible.

Sue moved to Independence, Missouri, with her daughter Raechell Marie to be closer to family. Sue was married for thirty years to Charles “C.W.” Smith, a long-time employee of Standard Oil and proud WWII veteran, and was a caring stepmother to his sons David and Mike. C.W. loved to drive and there were frequent family road trips crossing the US.

Sue was very close to her family and loved to spend time with them, visiting them in Oklahoma, Colorado, New Mexico, Indiana, California and Oregon. She also loved hosting friends and family at her home in Independence, frequently welcoming family from afar who loved to see the spectacle of Christmas lights on the Country Club Plaza at Thanksgiving. Sue was a fantastic dancer, and was famous for burning up the dance floor at family weddings with her brother Billy.

An accomplished professional woman, Sue capped her career with nearly thirty years of service at Wilcox Electric, a subsidiary of Thomson Corp., retiring as executive assistant to the CEO. There she made many life-long friends, who remember her joyful personality, sharp wit, and absolute trustworthiness.

Most of all, Sue was a devoted mother and she and her daughter Raechell cherished a special life-long friendship. An avid seamstress like her own mother, Sue sewed beautiful dresses for herself and Raechell and they loved to explore estate sales together to discover furniture in desperate need of Sue’s keen talent for refinishing. She was also an enthusiastic photographer, leaving behind boxes of photos and slides and traces of good memories.

Sue was extremely proud of Raechell as she advanced in her career, especially in her role as Founding Director of the H&R Block Artspace at the Kansas City Art Institute, opened in 1999, and as a long-time board member of the Charlotte Street Foundation. Over the years, Sue befriended many of the artists and staff who worked at the Artspace, at the college, and with the Foundation, and many sought out her smiling face at art openings and events. Sue also adored Raechell’s dogs, Frankie and then Tess, making frequent mid-day visits to her grand-dogs for long walks and lunch breaks. To say that they adored her in kind would be an understatement.

Mother and daughter shared a love of travel, a passion ignited for both when the family had an opportunity to visit David and Mike, both stationed in Germany for military duty. In the decades to follow, they would make several memorable trips together, including backpacking twice across Europe, England, and Ireland.

Sue was devoted in her care of her husband C.W. during many years of declining health until his death in 1997 and, later, cared lovingly for her mother Aldean, who lived with her in Independence in the last years of her life.

Sue was preceded in death by her parents E.J. and Aldean Kerchner, her husband C.W. Smith, her sister-in-law Phyllis Kerchner, and her niece, Veronique (Meier) Brown.

Sue had a kind, curious, and gentle spirit, and possessed the gift of making people feel special. Her many friends, young and old, loved her dearly and will miss a true friend they trusted, confided in, and often adopted as an honorary sister, aunt or grandma.

Celebrations of life will be held at a later date in Independence, Missouri and Fargo, Oklahoma.

Remembrances can be left on-line at www.speakschapel.com.

In lieu of flowers, gifts in her honor can be made to the Kansas City Art Institute to commemorate the 20-year anniversary of the H&R Block Artspace. Please include the memorial name with a donation made online at www.kcai.edu or by check to 4415 Warwick Blvd. KCMO 64111.