To share your memory on the wall of Thomas Howard, sign in using one of the following options:

Receive notifications about information and event scheduling for Thomas

Consider providing a gift of comfort for the family of Thomas Howard by sending flowers.

We encourage you to share your most beloved memories of Thomas here, so that the family and other loved ones can always see it. You can upload cherished photographs, or share your favorite stories, and can even comment on those shared by others.

Posted Aug 01, 2020 at 03:03pm
Tom was my brother in law. He was a caring man with a huge heart. He loved people, family, his dogs and loved the Mavericks. He always started our conversations calling me a Pollock!! I still hear his booming voice and laugh.
Comment Share
Share via:
AD

Posted Jul 24, 2020 at 09:12pm
My name is Angie and my mother's name is Aida about 3 years ago we met Tom and Deborah they both helped us a lot so much that I can't explain but very grateful Tom and Debra became very good friends we will miss him and love him always but I know he's in a good place in heaven not suffering and with his baby girl Wendy. I WILL NEVER FORGET ALL YOU HAVE DONE FOR US
Comment Share
Share via:
SR

Posted Jul 17, 2020 at 03:28pm
I always enjoyed seeing you at the Mavericks games. You will truly be missed. Shawn & Jackie Rooney
Comment Share
Share via:
GF

Tom was a great neighbor , he always liked visiting and helping out where he could. Tom will be missed . RIP 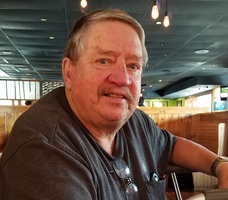