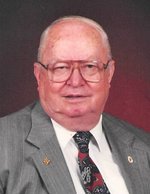 Virgil Milburn Harleman, 93, Independence, MO passed away Jan. 2, 2020. Services will be at 2 pm, Wednesday, Jan. 8 at Speaks Suburban Chapel, 18020 E. 39th St., Independence, MO 64055; interment at Mt. Washington Cemetery. Visitation will be 6 – 8 pm, Tuesday at the chapel. Memorial gifts may be made to Glenwood Park United Methodist Church Memorial Fund, 10000 E. 23rd Street S., Independence MO 64052.
Virgil Milburn Harleman lived a wonderful life. He was born on December 8, 1926, in Taberville, MO to William Virgil Harleman and Lula Pearl (Carroll) Harleman. Virgil never graduated high school, but he graduated life with high honors. He loved to tell stories about his childhood - riding horses, working on a ranch, the wild escapades of the “Katzenjammer Kids” (aka the Harleman boys).
Times were hard in the small town of Taberville during the depression, and so as a teenager he moved to Kansas City in the early 1940s. There, in 1944, Virgil met a young woman from Troy, KS, Loma McConnaughey. He dated Loma on a dare from his sister’s landlady and they were married 6 months later on Jan. 20, 1945. Shortly thereafter, he was drafted into the Army and deployed to Germany to serve in the occupation. He was proud to be a World War II vet. One of his favorite stories about his time in the service was when his commander asked him what he could do and he said he could drive a truck. The commander said he had enough truck drivers, could he cook? Virgil said yes, became a cook and that was the beginning of his lifelong passion for cooking.
After he returned to the States, Loma and Virgil made a home and raised a family in Independence. They had 2 children, Michael Dean and Deborah Irene. The family was made complete when David Harleman came to live with them. Virgil was a meat cutter for several local stores and retired in the 1980’s from Cutting’s United Super. He took great pride in treating his customers like family and never selling anything he would not serve his own family.
Virgil was the cook in the family and besides the many great meals he made, he loved to bake, make jelly and apple butter. Though he never made a fruitcake, he taught us that fruit cake soaked in peach brandy and wrapped in cheesecloth for 3-4 weeks made a great desert.
Virgil was passionate about sports, especially football. He and Loma became Chiefs season ticket holders when the team moved to KC and held their tickets for over 30 years.
Virgil loved his church, Glenwood Park United Methodist in Independence, where he was a beloved member for over 65 years. Virgil’s faith taught him not to judge other people, but how to be a better person and do for others. His life reflected his values. He was a kind, caring and generous person who always looked for ways to help others.
Virgil and Loma took yearly vacations by car long before the Interstate System. Virgil drove and Loma navigated, making sure he did not run out of gas. They visited every state except Alaska and Florida and made several trips to Canada. They would start driving before dawn so they could view the wildlife. Starting in 2006, they took an annual trip to The Black Hills of SD where Virgil loved feeding the donkeys in Custer State Park. He made several visits to the Pine Ridge Reservation and the Wounded Knee Monument to honor his Native American heritage on his father’s side. After Loma passed away in 2017, Virgil made one more trip to The Black Hills to say goodbye to a place they both loved.
During Loma’s final years, Virgil took extraordinary care of her in their home. He promised her she would never have to live in a nursing home and he was true to his word. She was truly his one love, his wife, his companion and “boss”. In 2015, they celebrated their 70th anniversary with their family and friends at Glenwood Park Church. Loma passed Dec. 19, 2017 and one of Virgil’s last words before he passed on Jan. 2, 2020, was that he was ready to go be with “Mom”.
Virgil is survived by his son Michael and wife Susan of Niangua, MO and their children Shelley, Kristy, Lori and Michael Todd; son David and wife Nancy of Harrisonville, MO and David's son Scott, and his step children Mimi and Buddy; daughter Deborah and husband Bob Page of Independence, MO and their children Tyler and Sam; 20 great- grandchildren, 8 great-great grandchildren; sister, Vinita Padgett of Thornton, CO and sister-in-law, Audrey Harleman of Independence.